Into the Wild and Watery Heart of Things 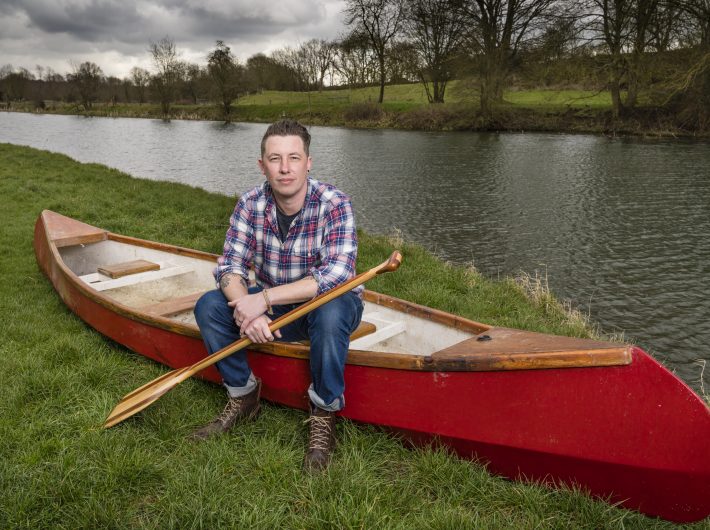 Matt Gaw explains how the Stour seduced him, inspiring his acquatic adventures through the rivers of Britain.

This is just a wet run, a jaunt to celebrate the building of the canoe, but I’m already lost to the water: the way she holds us, the gentle current squeezing us downstream like muscles inside the throat of some giant snake. The river here is wide and soft, bobbled and furred with a yellow fuzz of catkins blown from groups of willow that lower their tresses to the water like women washing their hair. We are moving slowly, each paddle stroke sending up tiny green whirlpools that dance and wink in the summer evening’s light. Behind us we leave a wobbling trail of water, folding in on itself and disappearing with just the smallest of bow waves that shiver to the muddy bank.

The pair of us – my friend James Treadaway and I – set out just under an hour ago from Sudbury Water Meadows, humping the Canadian canoe past the last of the picnickers and the first of the cider drinkers. We heaved her into position and slid her nose-first into the water, wincing at the sound of her wooden hull scraping along the platform and sighing with relief when she didn’t sink to the river’s silty bottom. It was James who built this canoe. A suburban Noah, he beavered away in his garden while his bemused neighbours peered over the fence, offering encouragement and the odd glass of orange squash. Like me, he has little experience of being on the water, but said he felt compelled to make a boat; spending months bending, shaping and gluing wood, before painting the canoe’s handsome curves and broad bottom a joyous nautical red – the colour of Mae West’s lips.

The canoe is high in the water and reassuringly stable, but it took until the frothing flow of Cornard Weir for us to learn how to keep her steady, our rookie strokes pulling and pushing the canoe’s nose from bank to bank like a swinging compass needle. Once, twice, three times we ploughed at speed into the side or plunged through thrashing branches and into reeds, emerging sheepish and covered with downy seeds and a boatload of surprised insects. The rhythm is easy now, the lifting and the pulling of the paddles unthinking and unhurried, minds and boat adrift.

In front of me James gestures with his hand. He doesn’t need to say anything. Both of us have grown up near this river. Played on its banks, shinned up its trees and cooled off in its waters, but this is the first time we have actually stepped off the land and followed it; have felt its pull; its relentless crawl to the sea. In some ways it’s a strange feeling. I had it as soon as we pushed off, not so much an out-of-body experience as an out-of-land experience. Yet that’s not right either, because I’ve never felt so utterly consumed and engaged with a landscape. I feel like I have been ushered into a world that until now has somehow been hidden. It is as if the river is a vein beneath the skin of the land and has the power to take us into the wild and watery heart of things.

Matt will be talking about his new book The Pull of the River at the Quay Theatre, Sudbury on Thursday 18 April 7.30 pm, tickets £10, book here