Notes from a riverside garden – April 2019 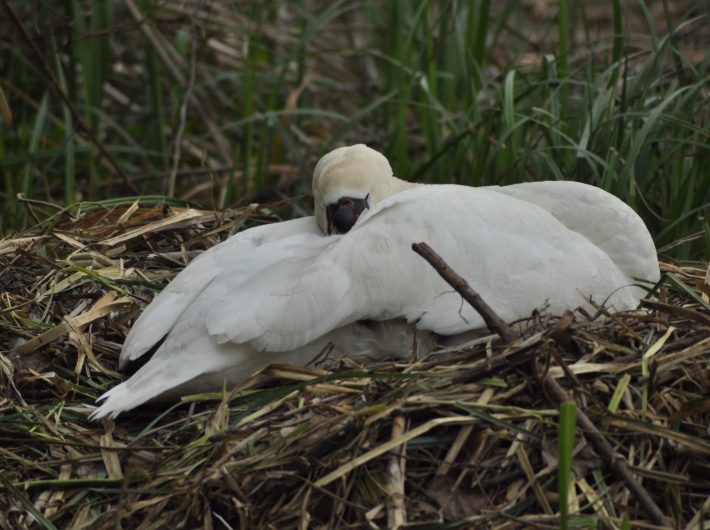 Taking a rest during nest construction

Our blog post today comes from SB with her Garden Clippings, seasonal observations from her beautiful garden on the banks of the River Stour.

As I write an early morning frost can be seen on the lawn through the window.  We have had one or two cold nights recently and the resulting frosts have damaged newly emerging leaves on our cladrastis lutea (American Yellow Wood) and the Korean maple has also suffered.  The heating is still on in the greenhouse for such cold snaps but regularly the door needs to be opened during the day when the temperature soars in the sunshine.

I fear I am behind with my seed sowing but I have planted out some onion sets and I have Charlotte seed potatoes chitting which will soon be ready for planting.  The greenhouse is so full of tender plants it is difficult to find space for seed trays too!  My potting shed contains several flower pots of dahlia tubers so space is limited there also.

A male pigeon is performing his courtship “bowing” to a somewhat unimpressed female on the garden wall as I glance outside.  The new sparrow terraces remain unoccupied.  We suspected this would be the case for the first year but hopefully they will be more tempting to the several sparrow pairs in the garden next spring.  However, the original terrace has at least one nesting pair in it.  Another pair have a nest in the honeysuckle trained up the wall beside our front door.  This has proved to be a popular nesting site in past years too.

One of the robins resident here has only one foot.  It seems to cope very well, the only time one really notices the absence is when it is on the birdfeeder as the affected leg dangles down while it grips on with the other.  Robins are such companions when working in the garden, appearing as soon as one turns some soil or even when mowing the grass.

The large group of drake Mallard frequently seen sleeping or feeding in the garden and the absence of the females is a sure sign that nesting is underway.  No ducklings thus far.  One nest situated out in the reeds in the lake has been predated, the eggs all dispersed and eaten.  The nests are vulnerable when the duck is away and this nest was really quite exposed, albeit with water all around it.

The pair of swans were performing “natures calling” in the millpond on the 9th April.  It is a rather beautiful event to witness as they conduct a mirrored “ballet” with their necks, so very graceful.

We are enjoying the first rhubarb of the season.  It grows with such abundance and speed.  It is positioned in the sheltered vegetable garden and is not forced.

Beneath the walnut tree we have made a spring border.  The erythroniums have spread and are now in flower along with primroses, pulmonaria and brunnera macrophylla ‘Jack Frost’ to name a few.  This border needs weeding as there is ground elder and the sticky goosegrass, it has many names, making an appearance.

We are yet to see a hedgehog, but wait in hope, and have created many habitats for them around the garden.  At the weekend we were exploring the Glasgow Botanic Gardens and got very excited when we spotted a hedgehog dropping on a path!   The friend we were visiting looked somewhat disconcerted by our enthusiasm for our discovery!   Unlike the wonderful dawn chorus we enjoy every morning here, Glasgow appeared to be rather devoid of obvious birdlife, save for magpies, that seemed to occupy every open patch of green.  To return to the Stour valley with all its natural variety is a source of infinite joy to us.  SB