Notes from a riverside garden – April 2021 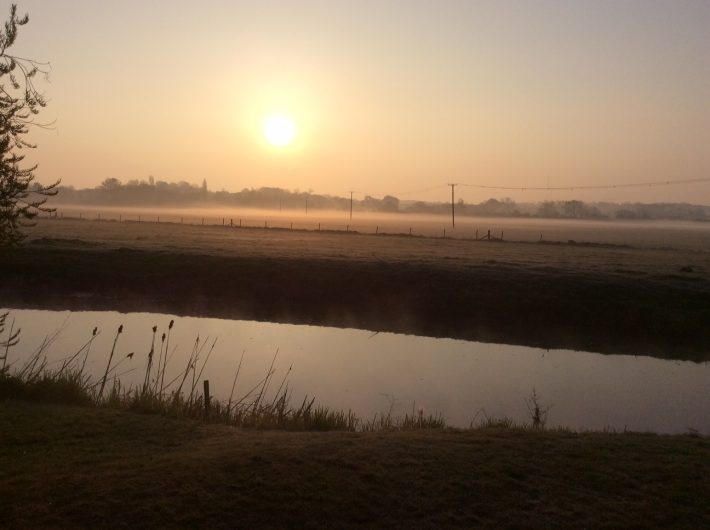 Sunrise over the water meadows on a frosty, April morning

The garden is a hive of activity with nest building in progress or completed in numerous locations. A pair of starlings have found an opening under the eaves of our garage roof and are busily darting in and out. This space has been used by bees in the past.

Adjacent to the garage is a Robinia pseudoacacia ‘Frisia’ where a pair of blue tits have taken up residence in a nest box affixed to the trunk of the tree. Close to the mill pool ivy has completely covered a pollarded, dead ash tree and this provides an excellent nesting site. We are suspicious a duck is nesting in there. It is a sizeable area of dense habitat, with a pigeon nesting, and probably other birds we have not noticed as yet.

I have been watching a pair of goldfinches building their nest in the top of a small Holm oak from our bedroom window. The pair fly off together each time searching for nesting material but only one returns with a blade of grass or a small feather (the materials I have observed so far) and disappears into the tree, while the male sits waiting in a prominent position close by. I have read that the females construct the nest so I assume she is the one conveying the nesting materials. Within a very short while she flies out and off they go together in search of the next item. They are back and forth within minutes. Such industry is admirable. 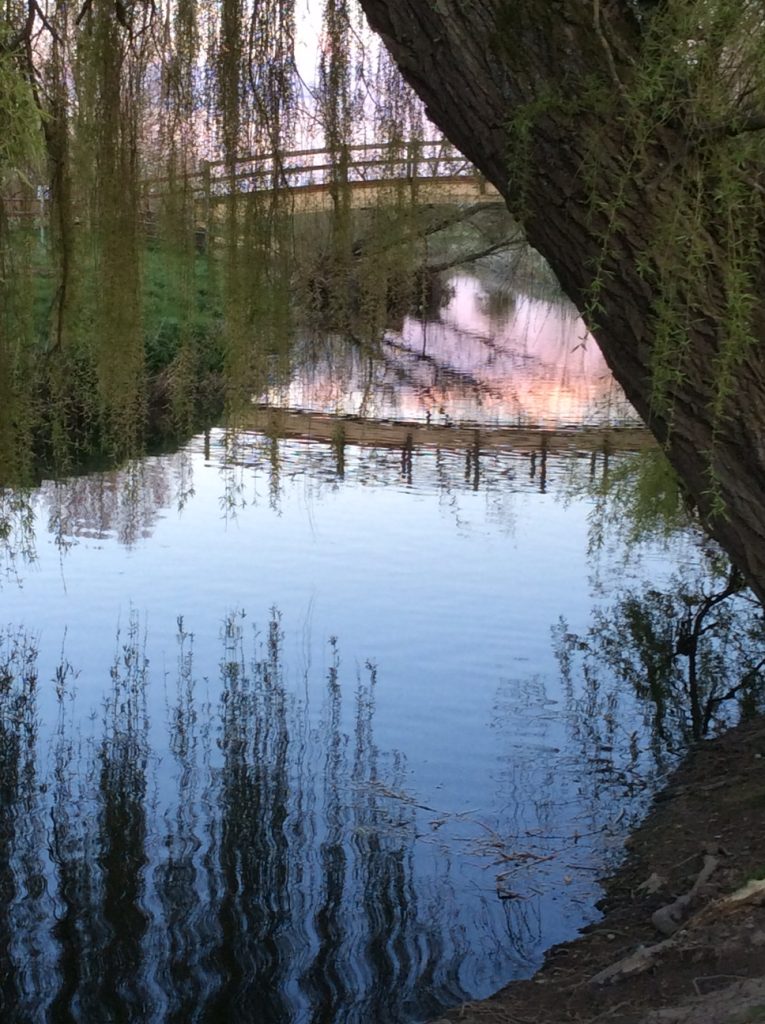 Evening at Henny bridge over the Stour

The pair of swans were mating in the mill pool during the Easter weekend. Such an elegant and rather beautiful bonding ritual takes place prior to mating with mirrored neck movements. I have observed this several times over the years, and I am always stopped in my tracks if I am fortunate enough to see this delightful display taking place. The aggressive and territorial nature of the cob swan has also been on display with two or three violent confrontations taking place in the mill pool with an interloping cob. The necks being used as a weapon as they entwine and beat each other with their wings in fights that can continue for some time. Eventually the loser manages to extricate himself from the relentless pecking and pounding of the resident male and makes a hasty retreat, usually across the island and to the river above the mill pool sluice gates. The female circles around the battling males giving the interloper the occasional peck too! We think it is the same cob trying to take over the mill pond territory but so far he has always been driven away minus a few feathers!

We were so thrilled to see a kettle of eight swallows swooping and circling over the river early on Easter Monday. Snow was in the air! Their visit was brief but a fabulous way to start the day. Other sightings in the garden include the blackcap, reed bunting and several chiffchaffs filling the air with their song. A pair of Egyptian geese also made their presence known for a few days as they surveyed the island as a possible nesting site. Being of an aggressive nature they chased off the mallards from a wide area around them. Calm has now returned as the geese seem to have moved on.

The paving on the terrace outside the kitchen window has been there for many years and gaps have appeared in places adjacent to the low brick wall and these are where the bank voles access their underground world. They dart out and make off with any seeds that fall from the bird feeders above. Recently we saw a stoat exiting a larger gap with a rodent in its mouth! It happened so fast it was impossible to identify the rodent, most probably a vole but maybe mice live under the terrace too.

In the same area, only two or three yards from our kitchen window, and where we walk past several times each day is a clump of long established thyme. It has become quite woody and about a foot high. I just take the flowerheads off with shears once they have finished flowering later in the year. The low brick wall extends around behind it. We have had ducks sheltering in the middle of this clump with their ducklings in the past. They are so well camouflaged and can sink down into the slightly open middle of the clump but still be hidden from view. This year we have discovered a duck nesting in this spot! She currently has six eggs. It is so hard to see her as the excellent camouflage her feathers provide merge completely into the stems and thin foliage of the thyme. In some ways it is the perfect nesting site. We put out grain and there is a water tray where she washes and drinks. She is also safer regarding the drakes who will chase any female that ventures from the safety of her nesting site. She is tucked away so not so visible to them. Yesterday she flew up onto the wall and within seconds was in flight being pursued by three or four drakes. When she does leave the nest the eggs are all carefully covered with a mossy layer so completely invisible to any predators from above. Nesting at ground level is a danger however, as we have badgers, foxes and a domestic cat as nocturnal visitors plus, of course, the resident stoat. We shall have to wait and see what happens. It is a hard time for the females, laying and sitting on eggs, avoiding the unwanted attentions of the opportunist drakes and later trying to raise their broods.

Thirteen tiny ducklings were on the terrace with their mother over the Easter weekend. They haven’t returned again but some ducklings have been seen in the lake on the island so hopefully the family have found a safe place there. 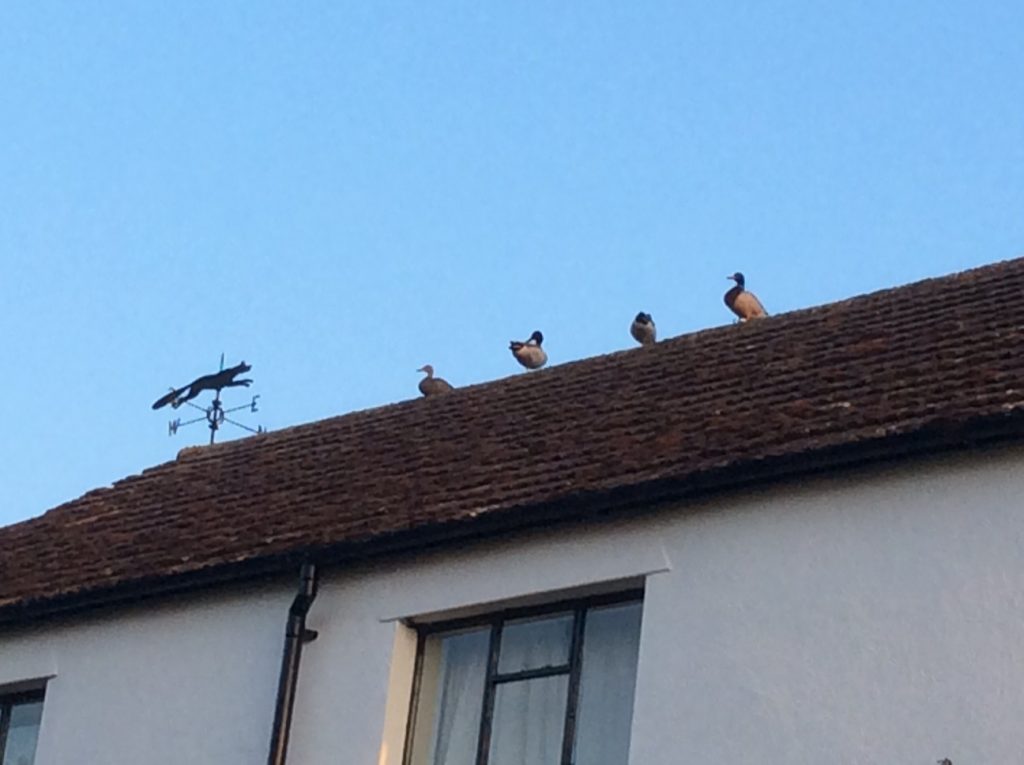 This morning there were four mallard ducks sitting on the ridge of the house roof. A good spot to keep an eye on all that is happening around them!