Notes from a riverside garden – August 2019 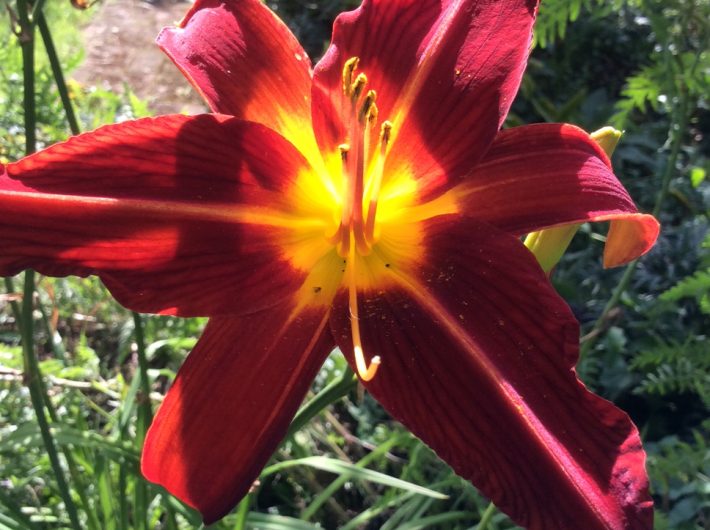 Our blog post today comes from SB writing about August in her idyllic garden on the banks of the River Stour.  This month she tells us of some breeding successes and some sadder outcomes.

I write from our study overlooking the millpond.  Looking out of the window I can see a heron standing on one of the semi-submerged branches of the fallen poplar, peering into the water, using his convenient vantage point to hunt from.  We think it is a youngster as it seems far less wary of movement in the house than other herons have been.  We are so pleased we didn’t “tidy up” and have the fallen tree removed as it has proved to be such a benefit to various birds in the garden.  A cormorant was standing with its wings outstretched recently, drying off in the sunshine.  The grey wagtails are frequently seen there as are the kingfishers.  Underwater it provides hiding places and habitat for the fish.

Beyond the millpond is a wartime pillbox.  It is used by peacock butterflies for shelter and to hibernate on the internal walls.  There has been a massacre of the butterflies by an unknown culprit.  All that remain are the lifeless wings, littering the dirt floor like macabre confetti.

In a mature white willow tree there is a dead, suspended branch, a result of storm damage, high up and in not too perilous a position for those of us below, if it should fall!   A pair of kestrels have nested in the hollow created by the snapped branch.  We can observe them hunting over the water meadow opposite for small mammals amongst the long grass.

Spotted flycatchers have returned to the garden.  Such a joy to watch them performing their acrobatics as they hunt from the trees and overhead wires.  They were late arrivals this summer.

Paul was walking along the pergola path when he came face to face with a young water rail.  It tried to seek refuge behind a shrub but as my husband got closer it flew across the millpond into a reed bed.  This is clearly good news as it confirms the successful breeding of the adults, which we captured on camera last winter.

The mallard and swans have had a poor breeding season.  Very few ducklings survived and only two of the seven cygnets.  The cygnets suffered heavy predation and the family very rapidly dwindled in number after hatching.

For the last few days the air has been filled with the high-pitched whistle and flashes of the bullet-like blur of blue as kingfishers hurtle back and forth across the millpond and up and down the river.   Two have been seen fighting and it would appear that when in flight they are chasing each other.   Perhaps the youngsters are being chased away from the parents’ “patch” or invaders have come in and need to be seen off!  There is certainly a lot of frantic activity which we haven’t witnessed before.  We sat beside the millpond, with a glass of wine, fascinated by their antics yesterday evening.  SB