Notes from a riverside garden – January and February 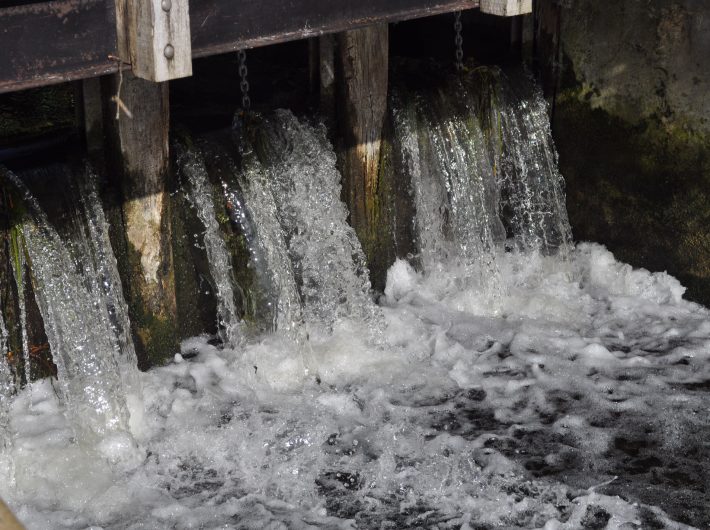 In our blog we catch up with SB and her wonderful seasonal notes from her beautiful garden on the River Stour. After January flooding, February sees signs of spring with spring flowers appearing and birds showing nesting activity.

The Christmas decorations have been put away for another year and we are now a few days into January. The river was in flood just prior to Christmas and spilled over onto the natural flood plain of the water meadows opposite. The flocks of gulls, rooks and assorted waterfowl soon descended in large numbers to forage on the temporary wetland. Parts of our garden were submerged for a day or two. The water roared through the sluice gates into the millpond creating turbulent rapids in its haste and quantity. We opened all the sluice gates to aid the flow downstream. After the water level had subsided, we were left with a sticky, slippery, quagmire of mud/silt over all the previously flooded areas. After each subsequent rainfall the slowly drying mud resumes its best efforts to attach itself to wellingtons, dog paws and wheelbarrow wheels! The tide line of detritus left on the pergola bank has been raked up and all the litter removed including a single large flip-flop and the remains of a gardening glove! Any further rainfall seems to result in the river level rising, perhaps not surprising considering the sheer amount of rainfall we have experienced throughout the autumn and into the winter so far.

Another flood issue we had to contend with was a very large willow bough which had been cut off upstream and then carried along in the flow, finally wedging itself in the sluice gates. Not an easy job to remove it as it had jutting out branches which snagged in the reeds and on the riverbank. A rope had to be tied to it and between us we managed to haul it out of the sluice gates and against the flow towards the bank. Paul then had to chop it up into sections on the waters edge, haul each waterlogged section out (not an easy task up to your ankles in slippery mud) and then pull the remaining bough further along to the edge of the bank until it was all reduced to manageable pieces. Needless to say the washing machine was put to good use later for our mud covered clothes!

The cormorants are back in large numbers. A group of seven or eight are regularly seen flying over the river. The millpond seems to be a favoured hunting ground with two or three diving for fish regularly. They are successful most of the time and one wonders how the fish stocks can cope with the predation of these consumers of large quantities of good size fish. They perch high up in the poplars looking almost prehistoric and sit with their wings open, drying them off. The little grebes are also present. Such charming little chaps, diving and bobbing along on the surface.

We have seen otter prints in the mud but no actual sightings of late. The resident Michigan blueback pheasant has discovered it can reach one of our wild bird seed feeders and stands on the wall outside our kitchen window, helping himself. Yesterday I spotted him in hot pursuit of a hen pheasant on the back lawn. The hen pheasant was obviously not impressed by his attentions and was running here, there and everywhere to get away from him! Diving in and out of the hedge and running to and fro across the lawn, in the end she took off to find a quieter area of the garden! 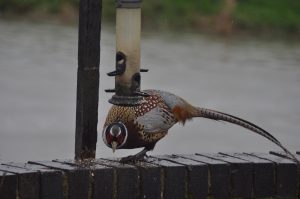 Buzzards are a fairly common sight in this area nowadays. Recently, one was circling above the millpond at quite a low altitude. Several ducks lined up in single file by the duck feeder, waiting their turn to feed, were immediately on high alert, standing to attention, very aware of the potential threat above. Suddenly they all took off in unison and flew into the millpond, feeling safer on the water. The buzzard did a final circle and then leisurely drifted off.

It is just a few days into February and spring flowers are appearing everywhere: snowdrops, dwarf irises, hellebores, pulmonaria to name a few and also daffodils in bud.   The ducks are seeking nesting sites. A favoured place is on top of a very tall Leylandii hedge. Pairs can often be seen on the flat top and sometimes a head might pop out from further down the hedge!   Skirmishes between males often erupt in the river and mating has already begun. The lazy days of winter seem to be forgotten and spring is definitely in the air.

We divided several clumps of snowdrops last spring and our efforts are now being rewarded with a greatly improved display on the millpond bank. 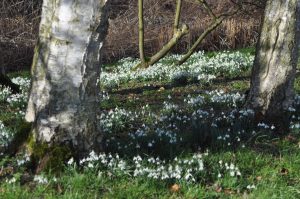 Snowdrops on the island

For a few days we had a visiting drake Mandarin duck in amongst the usual crowd of mallards. Such a handsome chap! Today I have seen a pair of reed buntings visiting the bird table.

The swans are fiercely protecting their patch with much puffing of feathers and chasing off of any interlopers. Sadly, a swan recently hit the electricity lines which run across the water meadow opposite us. The lines have attachments called diverters suspended from them which rotate in the wind and alert the swans to the danger. I have read that they also contain crystals which absorb and emit purple ultraviolet light so the birds can see them at dawn, dusk or in the dark. Usually the swans fly up and over the lines but on this occasion, for whatever reason, the swan misjudged.

We mounted two sparrow terrace boxes last spring on the gable end of our garage, below the existing box.   As expected, due to their newness, nothing nested in them last year. I was pleased to see a blue tit investigating each nest box recently. Popping in and out of each of the six access holes, working its way systematically across the terrace! Ideally we would prefer the sparrows to use the boxes but the blue tit was obviously very interested in the potential nesting site. SB