Notes from a Riverside Garden – March 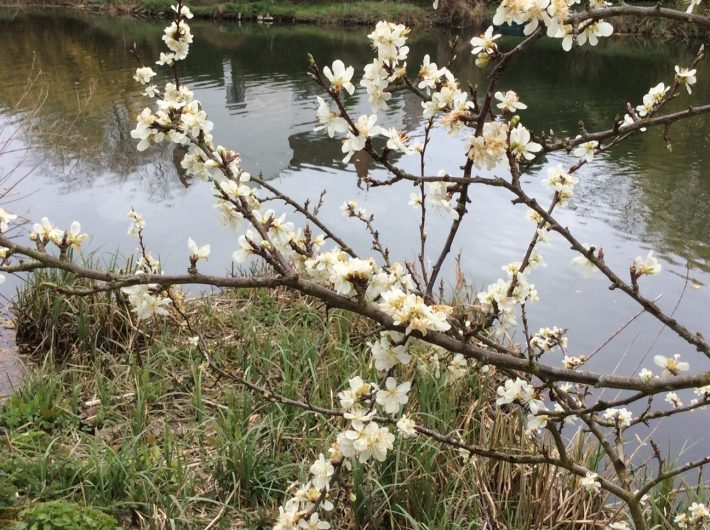 Our blog post today comes from SB writing about her beautiful garden on the banks of the Stour. Signs of spring are evident, something to cheer us in theses uncertain times.

We seem to have several pairs of swans vying for the territory around us. Two pairs live in reasonably close proximity to each other on the water meadows opposite. One pair are often seen in the flooded bomb crater (a legacy of the second world war when bombs were jettisoned over the village). The crater fills during times of flood and creates a shallow pool which is frequented by ducks, swans and recently a little egret was seen inspecting the area. Another pair stay down by the bridge and a third pair are in the garden. Occasional confrontations occur but generally without too much aggression involved.

A female goosander duck took up residence in the garden for a few days. We watched her diving in the millpool and then surfacing a distance away. Goosander hunt for fish. She sat companionably with the mallards on the banks when not hunting. She has now departed and hopefully will find a mate further along the river.

We are leaving a large lawn unmown this year. We have mown pathways around the edge and through the centre so that we can still walk beside the river and through to other areas of the garden. We shall strim around the trees planted in the lawn but otherwise leave it to nature’s own devices. This lawn has never been treated for moss or any other weeds. We do not do this on any of our lawns as sterile grass is not particularly attractive in our opinion. Daisies, clover, moss and even the occasional dandelion are welcomed!

We recently purchased a blueberry bush, which is now in a large pot and provided with the required ericaceous compost. We have wanted to “try” a blueberry bush for some time as friends have had abundant crops of berries from their plants. 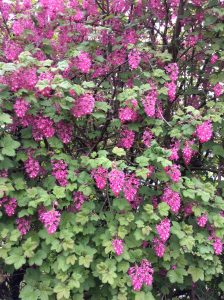 Pruning is our main task at the moment. Probably a bit late but the weather has been so atrocious for several weekends now. Climbing roses and wisteria on the pergola, sambucus nigra, salix and cornus dotted around the garden.

A sign that spring is on the way was a fabulous Brimstone butterfly spotted flying in the garden this morning. The warm sunshine and blue sky lifting everyone’s spirits! SB