Notes from a riverside garden – May 2021 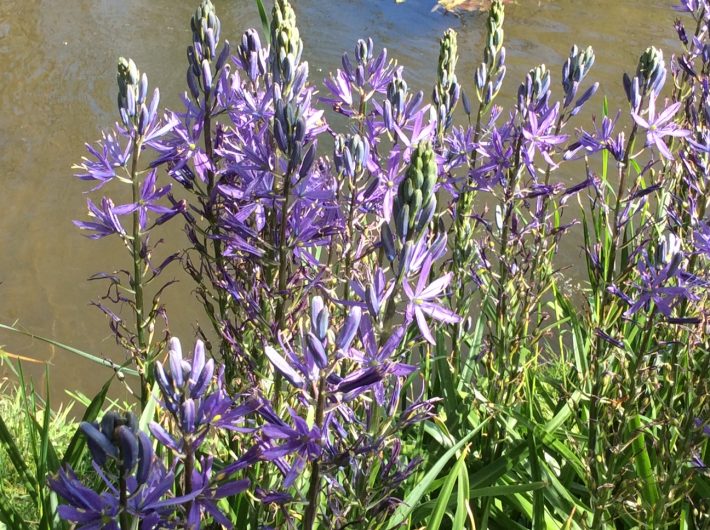 Camassia ‘caerulea’ beside the lake. A spring success!

The overnight frosts and cold of April have taken their toll on several plants in the garden. New leaves on hydrangeas shriveled; flowers on both the magnolias ruined, such a shame as the trees had been covered in buds and flowers this year. The Pacific Dogwood, Cornus nuttallii, whose flowers have been turned to a crisp brown, instead of the fabulous display of white flowers we were looking forward to.

Life continues despite the frosts and cold with the starling pair now to and fro with food for their vociferous young. The parent makes good use of our television aerial as a pausing spot before swooping in under the garage eave with the food. The swans have built a nest in the lake on the island in the preferred spot. The female is still sitting on her eggs and can be seen gently turning them with her beak periodically. She sits there, in the open, through all the weather conditions nature can throw at her. The incubation period is 35 – 41 days and the cob will also help to incubate the eggs. 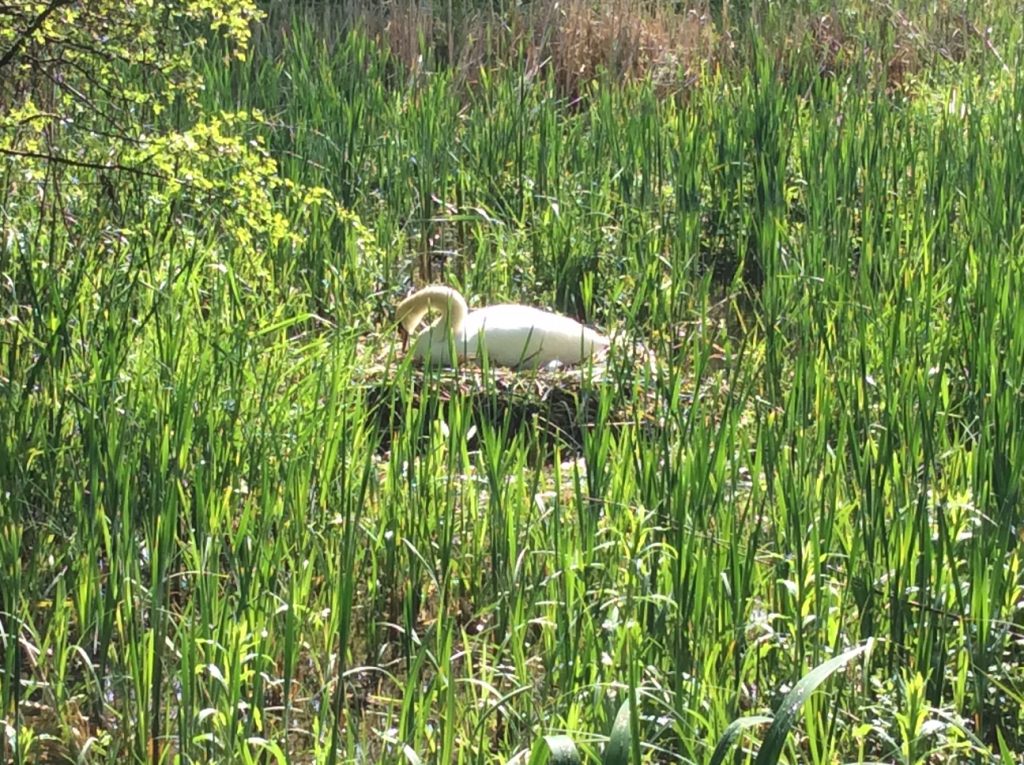 Mute swan nesting in the lake.

I wrote of the duck nesting in amongst the thyme on our terrace last month. The day after writing the piece I looked out of the kitchen window to see a duck with seven newly hatched ducklings in the thyme, she was in the nest and the ducklings were out and about, clambering through the thyme stems and exploring. It seemed very soon for the ducklings to have hatched but we assumed she must have been there for a longer period on the nest than we thought. It is always a joy to observe the antics of tiny ducklings who are so independent and busy pecking at everything so soon after hatching. I left the happy scene and returned to boiling a kettle for some coffee, just happened to glance out again a short while later to see another duck sitting on the edge of the occupied nest! There didn’t appear to be any hostility, so I assumed all was well. However, very shortly after this a dispute developed and the newly arrived duck was physically throwing the ducklings out of the nest and attacking the mother duck. It was quite horrible to witness, particularly the young being tossed about and trampled on in the melee. Despite knowing one should not get involved I couldn’t just stand there watching this unfold, so I did tap on the window and the “imposter” flew off. Thankfully all the ducklings seemed to be unscathed following their rough treatment and soon after the mother duck and ducklings wandered off towards the river. However, this was not the end of the drama as within a short while the “imposter” duck returned, climbed into the nest and proceeded to settle herself down. We had in fact got the situation completely wrong and the mother duck with ducklings was not the terrace duck but an interloper herself, trying to take over the prime position in the thyme! She did come back a while later with the ducklings and another tussle broke out but eventually, she left. What drama!! Unfortunately, after such a traumatic day for the terrace duck things did not improve and during the night her nest was raided by a badger we suspect, destroying all of her eggs. Only the mangled, chewed up remains of her eggs lay strewn about the area in the morning, which is the telltale sign of a visit from a badger.

The mother duck and seven ducklings did continue to come to the terrace for food and to drink and swim in the water tray. Surprisingly she never ventured into the thyme now that the nest had been abandoned. As is so normal at this time of year the duckling numbers reduced each day until she was left with one. Another brood that frequented the terrace was slowly reduced to two but they failed to survive. We named this remaining duckling Solo, not a good idea to name a wild creature but all our hopes for one survivor from all the ducklings we had seen in the garden were pinned on this little chap. Every morning we would check to see if it was still with its mother in the garden, or on the river. It was frequently left alone and we would hear it cheeping until its mother could return to it following yet another pursuit by drakes forcing her to leave the youngster. I guess you know what is coming but one morning, in early May, there was no sign of the duckling and sadly only the mother came for food that day. It really has been a most terrible early spring for the ducks and also for the moorhens who seem to have lost their chicks too. We can only hope the second broods have better luck in the perilous world they inhabit with so many predators around them coupled with the very cold April. The ducks, however, carry on as normal despite the awful losses and no doubt will soon be nesting again.

On the island there is an ancient white willow with several dead branches amongst its healthy branches, left in situ, we have removed obviously hazardous branches in the past. I recently witnessed a treecreeper swiftly ascending the trunk in search of food. On another occasion a great spotted woodpecker was drumming high up in the tree on a dead branch. A great joy was the arrival of the reed warblers whose distinctive melodic warble fills the air around the stands of bamboo in the garden. Another sound of spring was hearing the cuckoo in early May. SB