Notes from a riverside garden – September 2021 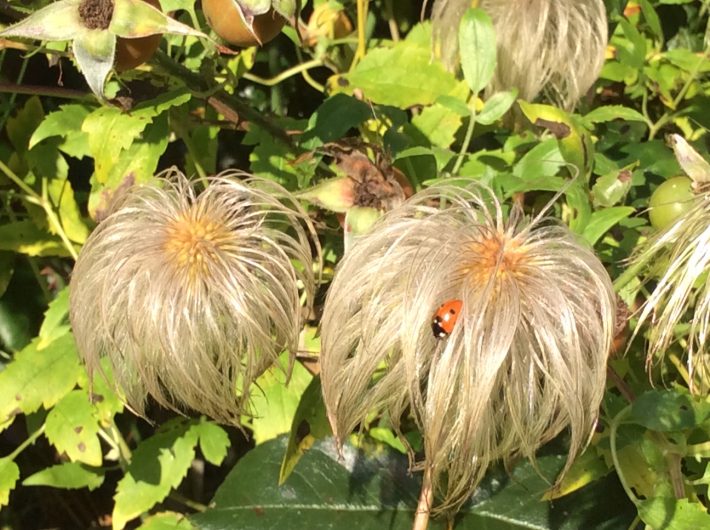 Ladybird on a clematis tangutica seedhead

Lawn mowing has by necessity continued throughout the summer with no let up due to the absence of any prolonged dry spell. Something I have noticed when mowing are the large numbers of ant’s nests and the resulting eruption of annoyed ants running over my feet as I walk behind the lawn mower. Neighbours must wonder what on earth is happening when I start jumping around, slapping my feet and ankles, removing my shoes and shaking them to remove the ants! Standing stationary for even a few seconds is not advised! The mowing has been accomplished in record times. Principally black garden ants but also, possibly, meadow yellow ants or the more aggressive red ants. We have not seen any green woodpeckers in the garden for some while, no doubt they would help to reduce the number of ants.

A nuisance caused by ants, these are usually the black garden ants, is their preference for making their nests in garden containers. The sure signs of ants in residence are the plant in the container wilting and looking very sorry for itself. Closer inspection reveals an ant’s nest within the container. Flooding them out repeatedly does seem to do the trick, eventually. Repotting is another option. It is a problem in several of our containers here.

An invitation to a sweetcorn party must have gone out to the local badgers as our sweetcorn patch was completely destroyed one night. The remains of the broken plants were strewn everywhere and not a single kernel of corn was left on any of the neatly nibbled cobs. I know this is a commonplace occurrence for vegetable gardeners locally but so very annoying all the same. They seem to know exactly when they are ready for picking too! Thankfully they do not seem to be interested in runner beans and I did get a good harvest from those.

As I write we are experiencing a short period of very warm, sunny days. After a grim couple of weeks or so of overcast, cool conditions it is so uplifting to have blue skies and sunshine again. The farmers have resumed harvesting now that the sunshine and dry conditions have returned. Trailer loads of golden wheat trundle past the house heading back to the farms from the fields. 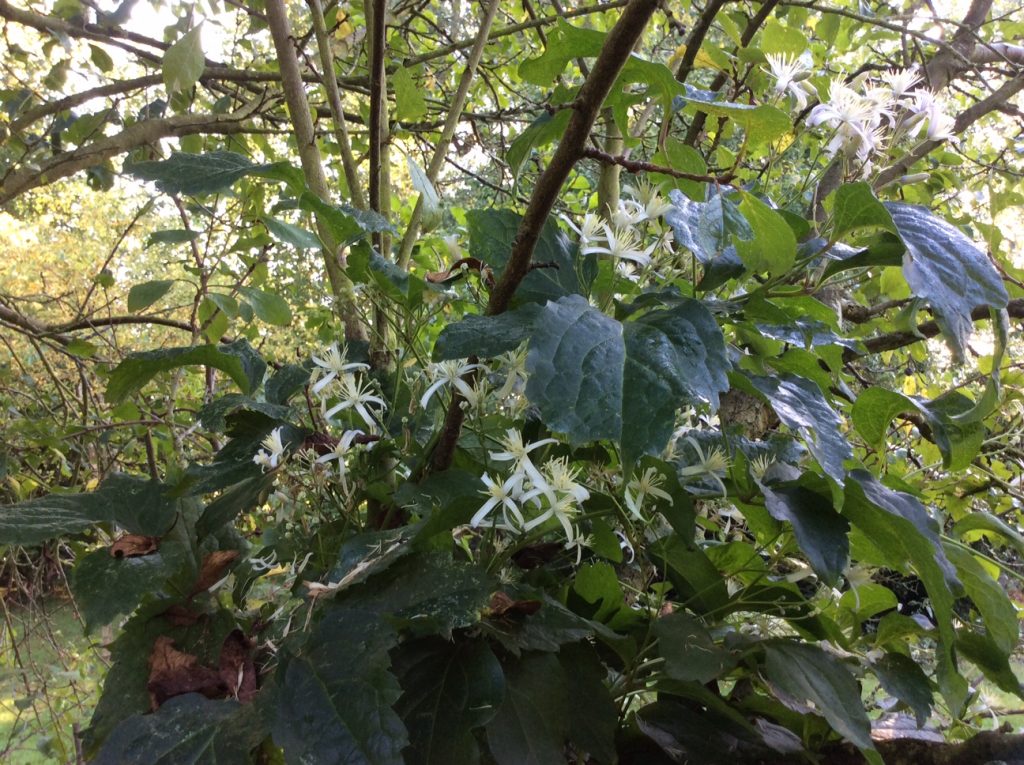 There are two fabulous clematis currently flowering in the garden. One has the most delicate white, starlike flowers in numerous sprays covering the plant and is called clematis flammula. We have it growing up one of the greengage trees on the Island. It also has a delicate, almond perfume.

The other is the more rampant clematis tangutica which scrambles over fencing and through a rose in the vegetable garden. It is cut down to virtually ground level every spring but rapidly covers a large area once in growth. It produces delicate Chinese lantern shaped buds, which open into attractive yellow flowers. These are followed by fabulous silky pale green seed heads resembling delicate sea anemones, when being blown in the breeze. Eventually they reach their final stage of wonderfully tactile soft and fluffy seed heads. SB