Jules Pretty is Professor of Environment & Society and Deputy Vice-Chancellor at the University of Essex. His sole-authored books include The East Country (2017), The Edge of Extinction (2014), This Luminous Coast (2011, 2014), The Earth Only Endures (2007), Agri-Culture (2002) and Regenerating Agriculture (1995). He is a Principal Fellow of the Higher Education Academy, Fellow of the Royal Society of Biology and the Royal Society of Arts, former Deputy-Chair of the government’s Advisory Committee on Releases to the Environment, and has served on advisory committees for BBSRC and the Royal Society. He was presenter of the 1999 BBC Radio 4 series Ploughing Eden, a contributor and writer for the 2001 BBC TV Correspondent programme The Magic Bean, and a panellist in 2007 for Radio 4’s The Moral Maze. He received a 1997 award from the Indian Ecological Society, was appointed A D White Professor-at-Large by Cornell University from 2001, and is Chief & Founding Editor of the International Journal of Agricultural Sustainability. He received an OBE in 2006 for services to sustainable agriculture, an honorary degree from Ohio State University in 2009, and the British Science Association Presidential Medal (Agriculture and Food) in 2015. This Luminous Coast was winner of New Angle Prize for Literature in 2013, and The East Country was winner of the East Anglian book of the year in 2018. 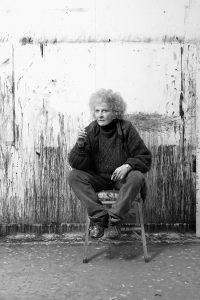 Maggi Hambling CBE is a patron of the River Stour Festival

Hambling studied with Lett Haines and Cedric Morris, and then Ipswich, Camberwell and the Slade Schools of Art. In 1980 she became the First Artist in Residence at the National Gallery, London, and in 1995 won the Jerwood Painting Prize (with Patrick Caulfield). In 1998 her sculpture A conversation with Oscar Wilde was unveiled at Adelaide Street, London, facing Charing Cross Station. In 2003 Scallop, a sculpture to celebrate Benjamin Britten was unveiled at Aldeburgh, Suffolk and was in 2005 awarded the Marsh Award for Excellence in Public Sculpture for Scallop.

Her work is represented in major collections internationally, and in the UK these include the British Museum, Tate, Victoria and Albert Museum, National Portrait Gallery and National Gallery. Recent museum shows include Maggi Hambling : Walls of water at the Hermitage Museum, St Petersburg, Russia (2013) and the National Gallery, London (2014), War Requiem & Aftermath at Somerset House (2015),  Maggi Hambling : Touch  a retrospective of works on paper at the British Museum (2016), The Quick And The Dead : Hambling Horsley Lucas Simmons Teller at Hastings Contemporary (2018),   Maggi Hambling : For Beauty Is Nothing But The Beginning Of Terror at both CAFA Museum, Beijing and Guangdong Museum of Art, Guangzhou, China (2019).

Hambling has established a reputation over the last four decades as one of Britain’s most significant and controversial artists, a singular contemporary force whose work continues to move, seduce and challenge.